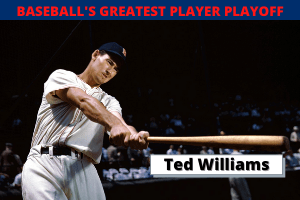 Ted Williams and fellow Hall-of-Famer, Bill Dickey, pull up their stirrups to face solid competition from a wide range of hitters. Dick Allen, Hanley Ramirez, Kent Hrbek, and Dale Murphy represent the modern era, while Jack Doyle, and Red Murray represent the old-timers. A top 4 finish guarantees a place in Round 5 of Baseball’s Greatest Player Playoff.

Showing that he is a force to be reckoned with, Dick Allen totaled 281 home runs on his way to 98 victories on the season but it wasn’t enough to stop Ted Williams from taking the crown in both of those categories. With those two taking up so many of the available wins, Bill Dickey was the only other team to manage a .500 record. Hanley Ramirez took the final qualifying slot. The others will try their luck in the Round 4 second chance.