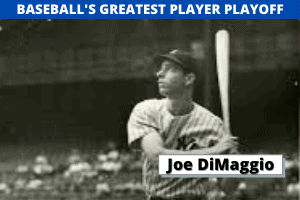 Yankee teammates Joe DiMaggio and Yogi Berra are the only Hall-of-Famers in this round but they will face stiff competition from the original 30-30 man, Ken Williams, modern stars Ryan Klesko and Carlos Delgado as well as stars of yesteryear, Barney McCosky, Zeke Bonura, and Bob Bescher. Only the top four are guaranteed to advance to Round 5.

Ken Williams’ 95 wins were only good enough for 2nd place as Joltin’ Joe DiMaggio reeled off 114 of his own. Ryan Klesko was the only other to manage a .500 record as Zeke Bonura outlasted Yogi Berra for the coveted 4th spot and an automatic trip to Round 5. The others head for the second chance Round 4.