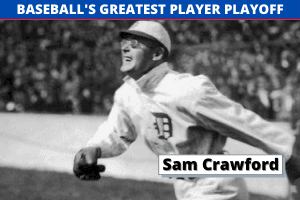 All-time triple leader, Sam Crawford will be competing with fellow Hall-of-Famers Elmer Flick, Edgar Martinez, and Monte Irvin as well as modern star Bobby Abreu and 1920s and 30s stars Ed Konetchy, Joe Vosmik, and Freddy Leach. Hitters must finish in the top 4 in order to automatically qualify for Round 5.

Elmer Flick ran away with this one, including going 20-2 vs. cellar-dwelling Joe Vosmik. Sam Crawford went on a 7-3 tear to finish the season in a tie with Bobby Abreu. Monte Irvin also qualified, finishing 4th… what could have been… he spent the first half of his career in the Negro Leagues and those statistics are not included for this tournament. We will see the others in Round 4 as they try to move on.