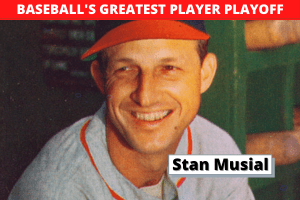 Hall of Famer Stan “The Man” Musial is joined by fellow Cooperstown inductees, Larry Doby and Luke Appling in Round 3 action. They are joined by 19th-century American Association star, Ed Swartwood, Don Baylor, Augie Galan, Wally Moses, and current star Josh Donaldson. Only the top 4 finishers head directly to Round 5.

Stan Musial went 7-3 down the stretch to secure first place, edging out Ed Swartwood. Galan and Doby will be joining them in Round 5, while the others head to Round 4 and their last shot at continuing in the tournament.