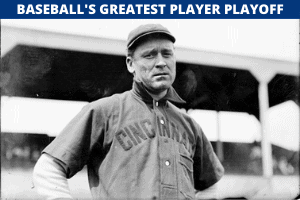 Old-Timer Handsome Joe Kelley and fellow Hall-of-Famer Johnny Evers match their speed against the power of HOF-ers Johnny Mize and Joe Gordon. Also in the mix are real gamers Danny Murphy, Ken Singleton, Al Rosen, and Chili Davis. You have to finish in the top 4 to guarantee a berth in Round 5.

Johnny Mize “played even with the contenders and beat the brains out of the bums” to cruise to a first-place finish. Joes Kelley and Gordon hung on to tie for second while my personal favorite, Ken Singleton used a balanced attack to qualify in fourth place. Finishers five through eight will try their luck in Round 4 in an attempt to continue in the tournament.