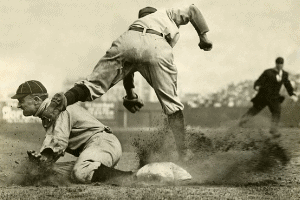 Number one seed, not just in this season, but in the playoff as well, All-time batting champ Ty Cobb faces fellow Hall-of-Famers Goose Goslin and Robin Yount, plus old-timers Fred Carroll, Jake Daubert, Chick Stahl, and Darby O’Brien, and four-time batting champ Bill Madlock. The top four finishers will automatically advance to Round 5.

Ty Cobb showed why he is the number one seed in the entire Greatest Player Playoff, following up his 122 Round One victories with an additional 114 here in Round 3. Second place Goose Goslin showed he needs to be taken seriously as well, notching 105 wins of his own. Also qualifying for Round 5 is Chick Stahl and Fred Carroll, tied for third with 71 victories each. The others are destined for a second chance in Round 4.