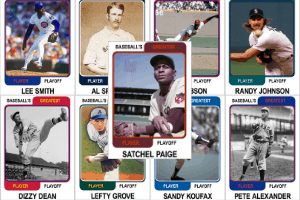 Round Two represents a “second chance” for hitters who were the recipients of bad luck in Round One to qualify to move ahead in the playoff. That means about half of the participants will be going home after the thirty-three seasons of this round.

In the interest of giving the hitters a different set of pitchers to hit against, I have removed the most-used starters and closer from Round One. That still leaves a ridiculously impressive staff for our hitters to face in Round Two. Every one of them has something that makes an argument that they might be the greatest pitcher in history.

In no particular order:

Clearly one of the greatest pitchers of all time, Lefty Grove won over 100 games in the minor leagues with the Baltimore Orioles before finally coming to the Majors after being sold to the Philadelphia Athletics at age 25. He then proceeded to compile the highest winning percentage among 300 winners, going 300-141 for a .680 mark over the next seventeen seasons. He was inducted into the Hall-of-Fame in 1947.

Satchel Paige threw his first professional pitch in 1926 and his last forty years later. Because Major League Baseball was segregated until Jackie Robinson broke the color barrier in 1947, Paige was a 41 year old rookie in 1948, going 6-1 with a 2.48 ERA for the World Champion Cleveland Indians. He came out of the broadcast booth in 1965 to throw 3 scoreless innings against the Boston Red Sox at age 58 for the Kansas City Athletics. Between the Negro Leagues, Latin America baseball, and barnstorming tours, Paige claimed over 2000 victories. He must have been something else. He was inducted into the Hall-of-Fame in 1971.

The second-winningest pitcher in history, Walter Johnson compiled a 417-279 record in twenty-one seasons with the Washington Senators between 1907 and 1927. He was the first pitcher to strike out over 3000 batters, ending with a career total of 3509, a record that stood for over fifty years and is still good for ninth place on the all-time list. More impressive to me is his 110 career shutouts, 20 more than second-place Pete Alexander. He was among the first inductees into the Hall-of-Fame in 1936.

World War I stole Pete Alexander‘s greatness. If not for the injuries he sustained – deafness in one ear, muscular damage from pulling the lanyard on artillery, epilepsy that he tried to mask with alcohol – he might have surpassed Cy Young in total victories. As a 24 year old rookie, Alexander won 28 games and he averaged 27 victories in his first seven seasons. All told, he won 373 games against 208 losses with an ERA of 2.56.

I will admit that I never really gave Whitey Ford the credit he deserves. First of all, he was a New York Yankee and as a Cleveland boy I came by my disdain honestly. Secondly, he played for the New York Yankees! I mean, how hard can it be to win 200+ games when you are pitching for those guys? But, in looking over his record, I can see that I was unfairly discounting his achievements. His 236 victories are not too shabby and they would have been significantly higher but for the two years he served in the military. His .690 winning percentage is among the best in history and might even have been higher. A ten-time All-Star and the winner of the 1961 Cy Young Award, Ford was elected to the Hall of Fame in 1974.

One of the most colorful characters in all of baseball, Dizzy Dean had a career peak as good as anyone, winning over 100 games before his 27th birthday. Finishing his injury shortened career with a 150-83 won-loss record, Dean was elected to the Hall of Fame in 1953.

A seven-time All-Star, Hall-of-Famer Lee Smith retired with a record 478 saves to go along with his 71-92 record and 3.03 ERA. One of only sixteen pitchers to appear in over 1000 games, Smith was consistent and productive during his eighteen-year career.

Bob Gibson was a spectacular hurler for seventeen seasons with the St. Louis Cardinals. A nine-time All-Star and the winner of two Cy Young Awards and the 1968 National League Most Valuable Player, Gibson was the second pitcher to achieve 3000 strikeouts and compiled a won-loss record of 251-174 with a 2.91 ERA. He was elected to the Hall of Fame in 1981.

A 6-10 left-hander who regularly topped 100 mph with his fastball, Randy Johnson was one of the most dominating pitchers of his era. A ten-time All-Star and five-time Cy Young winner, Johnson ended his career with a 303-166 record with a 3.29 ERA and 4875 strikeouts, second on the all-time list. He made the Hall-of-Fame in 2015.

For the first six years of his career, Sandy Koufax was a sub-.500 pitcher but for the next six he was “the left arm of God.” Those seasons resulted in a 129-47 record – a .733 winning percentage – and an ERA of 2.19. During those years he averaged 286 strikeouts per season and won three Cy Young Awards, an MVP, and was named to seven All-Star teams. He was a first-ballot Hall-of-Famer in 1972.

One of baseball’s pioneers, Al Spalding led the National Association in victories in all five years of its existence and when the National League started, he led that, too. Admittedly, it was a different time, with different rules, and the expectation was that “the pitcher” did almost all of the pitching but Spalding’s 252-65 won-loss record for a lifetime .795 winning percentage certainly deserves notice. He eventually became the owner of the Chicago White Stockings and started the sporting goods company that bears his name. For all these achievements, he was inducted into the Hall-of-Fame in 1939.