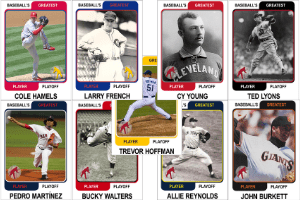 It was clear to me that using the same pitchers over and over would get kind of boring after a while. What I decided to do was to compile a list of the 279 pitchers with the most career wins and circularly seed the rounds to get a somewhat balanced set of pitching staffs. This should also provide for a trend toward more offense as the rounds progress and the seasons become more competitive. I eliminated four pitchers from the 1880s – Larry Corcoran, Guy Hecker, Ed Morris, and Mark Baldwin – who pitched fewer than ten seasons; let’s face it: it was a different kind of game back then.

Dennis Eckersley is of note in that I included him as a closer even though his 197 wins were sufficient to include him in the regular right-handed pitcher grouping. Although he had a substantial career as a starter, it’s as a reliever that he really made his mark.

My favorite “Record Unlikely To Be Broken” is most career losses by a pitcher: 315 by Cy Young, although Nolan Ryan with his 27-year-career came close with 292. That’s just one of many lifetime records held by Denton True Young, nicknamed Cyclone because of his wicked fastball. In his 22 seasons, along with all those losses, Young also won more games, 511, pitched more innings, 7356.0, and faced more batters, 29565, than anyone in Major League history. He was among the first players elected to the Hall of Fame in 1937 and, of course, is honored by the award given annually to the best pitcher in each league.

Ted Lyons won 260 games in a big-league career spanning 1923-1946, all with the Chicago White Sox. With three years lost to the war, he might have made it to the magic “300” mark. As it was, “Sunday Teddy,” so nicknamed because in his later years he only pitched one day per week, the second game of Sunday double-headers, was a three-time 20-game winner and was named to the 1939 AL All-Star team. He was elected to the Hall of Fame in 1955.

Certainly a dominant pitcher and undeniably an all-time great, Pedro Martinez graced the mound for five teams and is primarily known for his spectacular years with the Boston Redsox. An eight-time All-Star and three-time Cy Young Award winner, “Pedro el Grande” had 219 wins against only 100 losses, giving him a winning percentage of .687, good for seventh all-time and third for pitchers in the modern era. Add in 3154 strikeouts and you can see why he was elected to the Hall-of-Fame in 2015.

The unheralded Bucky Walters was one of the top pitchers of the late 1930s-early 1940s. He won an MVP and if it had been a thing, he would have won three Cy Young Awards. All told, his record of 198 wins vs. 160 losses came along with 42 shutouts, a 3.30 ERA, and five All-Star selections. You could definitely make an argument for William Henry Walters’ election to the Baseball Hall-of-Fame.

A solid, if not spectacular hurler, Larry French was a left-handed screwball specialist considered by many to be the equal of his more famous contemporary, Carl Hubbell. The owner of a 197-171 career won-lost record, French also managed a 3.44 ERA and was a member of the 1940 National League All-Star team. He developed a knuckleball in 1941 and at the age of 34 was experiencing a revitalization of his career when he enlisted in the Navy in World War II, effectively ending it. His time in service surely cost him 200 wins and maybe a slot in Cooperstown.

A six-time All-Star, Allie Reynolds is perhaps best known for throwing two no-hitters in the 1951 season. In thirteen seasons split between the Cleveland Indians and New York Yankees, “Superchief” compiled a 182-107 record with an ERA of 3.30.

John Burkett had an excellent career, compiling 166 wins, 1,766 strikeouts, and a 4.31 earned run average for the San Francisco Giants, Florida Marlins, Texas Rangers, Atlanta Braves, and Boston Redsox. Now that his baseball career is over, “Sheets” has become a successful professional bowler!

Currently active as of this writing (although, with COVID-19 putting the 2020 season in doubt, who can tell), Cole Hamels has had an extremely solid career. His record stands at 163-121 with an ERA of 3.42. A left-hander from San Diego, California, “Hollywood” Hamel is a four-time All-Star who combined for a no-hitter in 2014 and had a complete game no-no in 2015.

Our closer for these rounds will be the Number 2 man on the all-time saves list, Trevor Hoffman. His 601 saves are second only to Mariano Rivera‘s 652, and his career 2.87 ERA is equally impressive as is his over one strikeout per inning pitched. A seven-time All-Star and two-time Rolaids Relief winner, after eighteen seasons and 1035 games – all in relief, Hoffy was elected to the Hall of Fame in 2018.