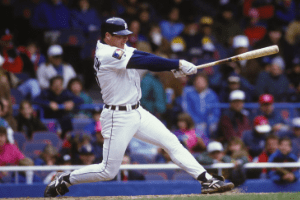 Mickey Tettleton is the top seed and he faces, among others, fellow tiger and Hall-of-Famer Charlie Gehringer in the quest to advance to Round Three. They will also compete against Johnny Frederick, Tony Womack, Greg Vaughn, Jeromy Burnitz, HOF-er Travis Jackson, and Hugh Nicol. Top 4 move on, the others move home.

Charlie Gehringer made it clear that his Round One performance was a fluke, crushing all competitors and compiling 106 victories and leading by 25 games by season’s end. Johnny Frederick, Travis Jackson, and Mickey Tettleton also qualified for Round Three. Sadly, we must say “Au revoir” to the rest.