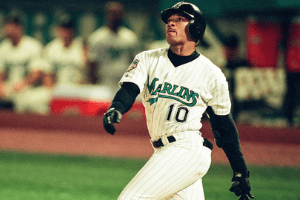 Drafted out of high school and playing for the Milwaukee Brewers at 19, Gary Sheffield put up Hall-of-Fame-worthy numbers in his 22-year career. A nine-time All-Star, he slugged 509 home runs, drove in 1676 runs, and picked up 2689 hits for a .292 batting average. The big knock is that his fielding was somewhat… suspect. Fortunately for him, in this playoff that matters not a whit!

“Sunny” Jim Bottomley was a feared slugger for most of his sixteen big league seasons, hitting .310 with 465 doubles, 151 triples, 219 home runs, and 1422 RBI. His lifetime slugging average was an even .500. Bottomley had a game for the ages on September 16, 1924, when he went 6 for 6 with two home runs and 12 RBIs. He still holds the record (since tied by Mark Whiten) for RBI in a single game. In 1928 he became one of only four live-ball era players to lead the league in both home runs and triples. He’s in pretty good company with Mickey Mantle, Willie Mays, and Jim Rice. He was selected for the Hall-of-Fame by the Veteran’s Committee in 1974.

Creeping up in the Hall-of-Fame voting, Scott Rolen has much to recommend his election. In a seventeen-year career in which he hit .281, he also slammed 316 home runs and 517 doubles. The 1997 Rookie of the Year, he was named to seven All-Star teams and won six Gold Gloves.

Michael Young qualified for the tournament based on his 441 career doubles but he has a .300 lifetime batting average and over 1000 RBI, as well. Pretty good production from the shortstop position, if you ask me.

Another of those “What might have been” cases, Cecil Travis was among the best hitters in baseball for the nine years leading up to World War II. After Pearl Harbor, Travis was drafted into the army at age 27, just as his career was peaking. After almost four years of military service, he was not the same player and was out of baseball by the end of 1947. Still, he managed a .314 batting average with over 1500 hits. He may surprise in the tournament.

Known primarily as a good fielding second baseman, Tony Taylor played over 2000 games, hitting .261. We’ll see, but I am not hopeful for his chances.

In his ten years with the Seattle Mariners and Chicago Whitesox, Julio Cruz hit .237. But he stole 343 stolen bases and that’s what qualified him for the tournament.

Forgive me, all you Lou Boudreau fans, but I wonder how much better his lifetime statistics would have been if he hadn’t been named player-manager of the Cleveland Indians as a 24-year old shortstop in 1942. His .295 batting average and 385 doubles in what really amounts to eleven seasons is nothing to sneeze at. The fact that he qualified for the tournament based on his selection to the Hall-of-Fame should not be seen as a slight to his offensive production. I think he will do well.

Despite losing his last three games, Gary Sheffield held off Lou Boudreau to take the season. Cecil Travis led in hitting with .237 vs. the league’s .208 but that wasn’t enough to give him a winning record.

Sheffield and Boudreau are joined by Sunny Jim Bottomly and Scott Rolen in Round 3. The others head to Round 2.