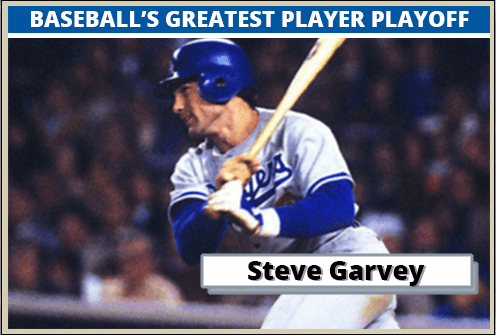 “Long John” Reilly (he was 6’3″ when the average big leaguer was 5’9″) carries the top seed in this elimination round that features some stars of the 1970s. Steve Garvey, Don Baylor, and invitee Bake McBride square off against modern stars Adrian Gonzalez and Fred McGriff and old-timers Charlie “Piano Legs” Hickman and Charlie Grimm. It’s “do or die” time!

Steve Garvey started out strong with a 19-6 April and held on for a convincing first-place finish. Bake McBride, taking full advantage of his invitation, hung on for another round and will be joining Adrian Gonzalez, John Reilly, and Fred McGriff (fifth place but over .500) in Round 5. Don Baylor went on a tear at the end but came up a single victory shy of qualification by dropping his last two games. We say goodbye to him, Hickman, and Grimm.