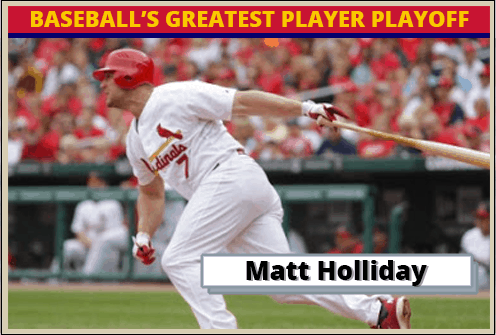 The thoroughly modern Matt Holliday claims the top seed, facing old-timers John Reilly and Joe Harris, along with mid-century stars Bob Nieman and Joe Adcock, 70s greats, Hall-of-Famer Willie Stargell and Cecil Cooper, and (maybe) unfairly maligned Rafael Palmeiro. With 154 games ahead of them, only the Top 4 are guaranteed slots in Round 5.

Willie Stargell unleashed significant power and ran away with the season title. Matt Holliday had an enviable season win total but only managed a second place finish. Rafael Palmeiro and Joe Harris claimed the other two qualifying slots. The others get a second chance in Round 4.

Check out these most recent seasons: