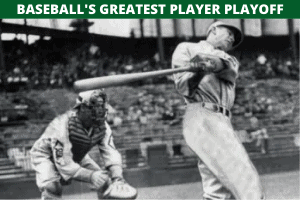 In a rarity, we have a non-Hall of Famer as our top seed! Lefty O’Doul and his lifetime .349 average go up against HOF-ers Frankie Frisch, Al Kaline, and Earl Averill as well as the underappreciated Gene Tenace, John Kruk, Rusty Greer, and not-quite-HOF-er Andruw Jones. Top 4 automatically qualify for Round 5.

Lefty O’Doul won 8 of his last 10 and while it was enough to catch Al Kaline for a second place tie, it wasn’t enough to catch Earl Averill who finished first. They move on to Round 5 along with Frankie Frisch in fourth place and fifth-place John Kruk, who managed a .500 record. Tenace, Greer, and Jones try their luck in Round 4 for a second chance.