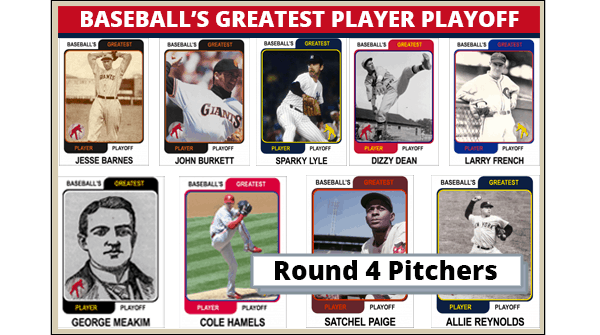 As I stated briefly in the Round 3 Wrap Up, the computer manager made some very specific decisions about who to use and how much to use them that put a hurt on right-handed batters. This especially affected hitters who had large right-handed biases. I wanted to correct for this or, at the very least, acknowledge it and make an effort to be certain that it was fair. I understand that these guys have to be able to hit everyone to do well in the tournament but I didn’t want to lose a hitter that I thought had a chance to go far.

Inasmuch as the even number rounds are “second chance” opportunities, my decision was to use the pitchers that had not seen much action in the previous rounds and give them a chance against the hitters. I also thought this would even out some of the imbalances of the previous round. I grabbed Burkett, French, Hamels, and Reynolds from Round 3, Dean and Paige from Round 1 and 2, and then filled out the staff with Barnes, Meakim, and Lyle as our closer.

At his peak with John McGraw‘s New York Giants, Jesse Barnes was as good a pitcher as anyone in baseball. He was named, along with Walter Johnson, to Baseball Magazine’s All-American team following the 1919 season, in which he went 25-9 with a 2.40 ERA. The fact that he lost 20 games twice in his career is probably the reason he is not more well-known.

John Burkett had an excellent career, compiling 166 wins, 1,766 strikeouts, and a 4.31 earned run average for the San Francisco Giants, Florida Marlins, Texas Rangers, Atlanta Braves, and Boston Redsox. Now that his baseball career is over, “Sheets” has become a successful professional bowler!

One of the most colorful characters in all of baseball history, Dizzy Dean‘s career peak was as good as anyone’s, winning over 100 games before his 27th birthday. Finishing his injury-shortened career with a 150-83 won-loss record, Dean was elected to the Hall of Fame in 1953.

A solid, if not spectacular hurler, Larry French was a left-handed screwball specialist considered by many to be the equal of his more famous contemporary, Carl Hubbell. The owner of a 197-171 career won-lost record, French also managed a 3.44 ERA and was a member of the 1940 National League All-Star team. He developed a knuckleball in 1941 and at the age of 34 was experiencing a revitalization of his career when he enlisted in the Navy in World War II, effectively ending it. His time in service surely cost him the 200 win mark and maybe a slot in Cooperstown.

Recently retired, Cole Hamels had an extremely solid career. A left-hander from San Diego, California, “Hollywood” Hamel is a four-time All-Star who combined with relievers Jake Diekman, Ken Giles, and Jonathan Papelbon on a no-hitter in 2014. He had a complete-game no-no of his own in 2015.

An outstanding pitcher who pitched in 899 games (but never started one) in his 16-year career, Sparky Lyle became one of the early modern closers, becoming the first reliever to win the American League Cy Young Award in 1977. He also gained fame as the author of the ribald, tell-all book, “The Bronx Zoo.”

Okay, the selection of George Meakim for this season deserves an explanation. He’s not supposed to be here. Meakim was an obscure 19th-century hurler, who had brief tenures on 4 teams, in 3 seasons, and a single 7 inning appearance for the Louisville Colonels 3 years later. His name, however, is very similar to Jouett Meekin (152-133 over 10 seasons), who is supposed to be here. Oops. But here’s a little secret: I have already played the Round 4 games! Meakim it is. We’ll probably see Meekin at some point.

Played as: Satchel Paige
Full Name: Leroy Robert Paige
Nicknames: He picked up “Satchel” as a boy by toting bags at the railway station.
Lifetime: 28-31, 33 Saves, 3.29

Satchel Paige&nbsp;threw his first professional pitch in 1926 and his last forty years later. Because Major League Baseball was segregated until Jackie Robinson broke the color barrier in 1947, Paige was a 41-year-old rookie in 1948, going 6-1 with a 2.48 ERA for the World Champion Cleveland Indians. He came out of the broadcast booth in 1965 to throw 3 scoreless innings against the Boston Red Sox at age 58 for the Kansas City Athletics. Between the Negro Leagues, Latin America baseball, and barnstorming tours, Paige claimed over 2000 victories. He must have been something else. He was inducted into the Hall-of-Fame in 1971.

A six-time All-Star, Allie Reynolds is perhaps best known for throwing two no-hitters in the 1951 season. In thirteen seasons split between the Cleveland Indians and New York Yankees, “Superchief” compiled a 182-107 record with an ERA of 3.30.